With nominations closing for the Teach Portsmouth Awards Live on Friday 7 May, the time feels right to update our readers on what's next as well as introducing some exciting new developments including our celebrity host.

Over the last few weeks, we've been introducing readers to our incredible sponsors who have helped support the event. As we near the big day and with nominations closing, we wanted to give everyone an update on where we are. 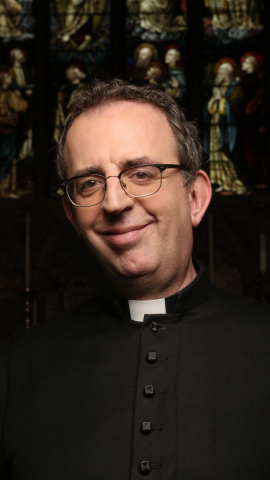 With a career spanning both music and broadcasting, Reverend Richard Coles joins the Teach Portsmouth Awards Live as host.

Richard is well known for his appearances on Strictly Come Dancing as well as QI and Have I Got News For You. He currently co-hosts Saturday Live on BBC Radio 4.

Richard will be presenting the awards on the night adding some stars and sparkle to the event. Between presenting, Richard is a priest of the Church of England and Vicar of Finedon in Northamptonshire.

We'll be interviewing Richard in the coming weeks - so stay tuned to the Teach Portsmouth news hub for more soon. Alongside Richard, other stakeholders will also join the celebration to thank teachers, support teams and leaders.

This year, everyone has gone above and beyond in schools and colleges across Portsmouth. To recognise their efforts, a new campaign will launch to celebrate their amazing contributions during the pandemic.

We are pleased to introduce #TeachPortsmouthCelebrates - an exciting two week campaign which ask schools and colleges to organise an event to celebrate their staff.

The campaign launches on 7 June. Schools and colleges will be asked to share an image/video on their social media pages using the hashtag #TeachPortsmouthCelebrates.

A handy resource pack can be downloaded from the website. It includes ideas on the types of activities schools/colleges can organise as well as information on the campaign.

We've been really impressed with schools and colleges nominating their incredible staff. On Friday 7 May, nominations closed as we moved to the next stage in the awards process.

Our shortlisting panel will meet on Tuesday 18 May to discuss nominations and create a shortlist of candidates. Once a decision has been made, the shortlisted candidates will be contacted.

Those who have been recognised in the long service award automatically qualify, without the need to be shortlisted. Local residents who nominated a superstar teacher, support team or leader in the people's choice award category will not require shortlisting either. We'll be introducing readers to our people's choice nominees over the coming weeks - so stay tuned to the news hub for more soon.

Discover more about the awards

If you want more information on the Teach Portsmouth Awards Live, you can now visit the teaching section of the website. You can learn more about our sponsors and our host too.

Callum Murphy co-ordinates the Teach Portsmouth team who create inspirational content about Portsmouth as a teaching city. His aim is to provide those interested in teaching with the information they need.

Keep up to date with the latest teaching news from Portsmouth - inspiring you to start something rewarding today.

Your time to teach campaign explained